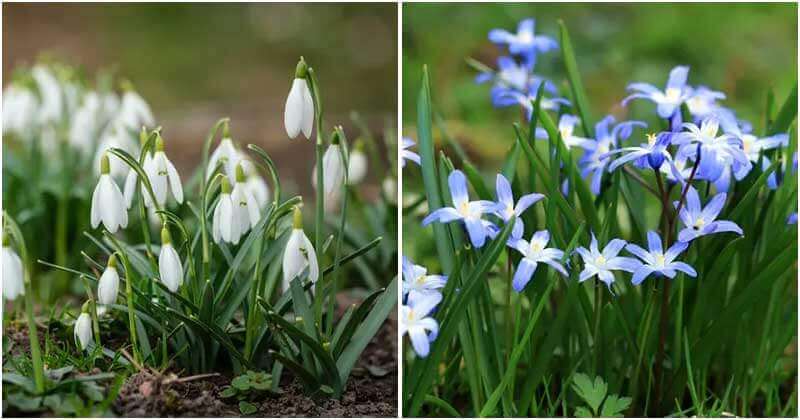 Do you want to have a beautiful garden after a long and dreary winter season? Surely yes, right? Flowering bulbs are early harbingers of spring, and also are the thing that we want to write in the post today. Aside from buoying our spirits, bulbs that emerge in late winter and early spring are an important source of nectar for bumblebees and other pollinators just waking up from a long nap.

Here are 15 bulbs that grow in fall and give a beautiful garden in spring that you will fall in love with. Growing them, you will have a chance to enjoy your colorful and bright garden in the atmosphere of spring. There is nothing better than walking in a beautiful garden and feeling the best of what the spring weather brings. They are so beautiful that will brighten up not only your garden but also your mind. So let save them and grow some for your garden in the spring of this year. Snowdrop is one of the earliest bloomers, making its appearance in late February to March. Snowdrop will even pop up when there is still a cover of snow on the ground. It also resembles little drops of snow, with downward-facing, bell-shaped flowers in milky white.

#2 Glory of the Snow The glory of the snow is another really early bloomer that graces the landscape from February to April. It, too, will bear flowers in snowy conditions. The glory of the snow self-seeds and produces bulb offsets each successive season, rendering drab winter scenes into gorgeous spreading carpets of blue. Snow crocuses send out flowers from underground corms in late winter and early spring and are hardy enough to poke through snowy drifts. Although snow crocus is traditionally a cheery yellow hue, numerous cultivars offer more choice in the color palette, with pure white, cream, and bicolor options. Winter aconite is a flowering tuber from the buttercup family. As another early riser, it supplies a much needed bright pop of yellow color from March to April. A classic choice for the spring garden, daffodils are a hardy and reliable early bloomer that return year after year. Although daffodils are most often seen in yellow or white, they are available in dozens of cultivars that span oranges, pinks, and bicolor hues. Depending on the species, they may flower singly or in clusters along the stem. Reticulated iris is not only beautiful but supplies a delightfully sweet fragrance early in the season. With bluish to deep purple coloring, the outermost petals are marked with interesting gold and white streaks. This low growing bulbous perennial produces bulblets and offsets after flowering. Dig up and divide bulblets in early autumn to grow the colony. Spring crocus blooms about two weeks after snow crocus, spring crocus is frequently seen in white or purple hues. It opens up its cup-shaped flowers in bright sunlight and closes them each day at dusk. With a 3 week flowering period, spring crocus looks absolutely stunning when planted in groups of 100 to 150. The large and showy flowers of tulips are a welcome sight in spring. Tulips are typically in bloom from April to May and come in every color except true blue. Siberian squill is an easy to grow, incredibly cold hardy bulbous perennial that provides a bright blue color to the early spring garden. It bears multiple, nodding, bell-shaped blooms along each stem. Though it usually sticks with its cup shape, the petals will open up to a starry form in bright sunlight. Windflower is a low growing tuberous perennial with fern-like foliage. It blooms in mid-spring with charming flowers that resemble daisies in blue, white, pink, or purple. It grows its numbers each year by self-seeding and spreading underground tubers.

17 Plants Can Get Rid of Fleas From Your House

15 Gorgeous Ways to Enjoy Landscape Around Your Pool

14 Different Types of Violets For The Garden

Uses of Baking Soda In Your Garden