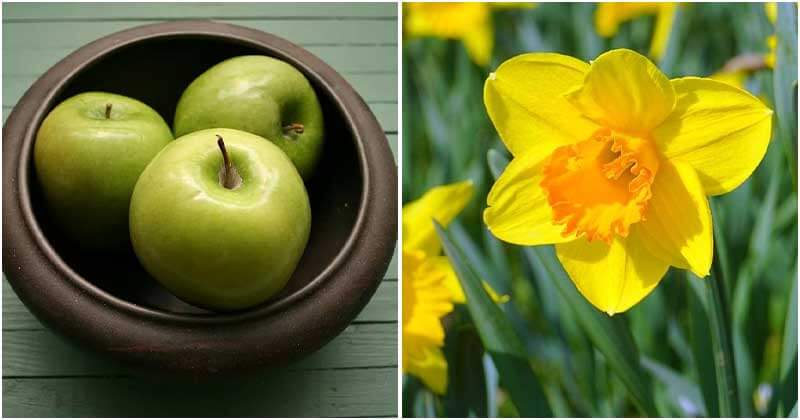 Humans can be in danger from some of the plants. They are normal plants that you easily see anywhere, even they grow in your garden but you don’t know about their poison inside them. So, many gardeners so surprised to discover that they are growing some of the world’s deadliest plants in their own backyards. And here are several plants with lethal tendencies that we want to share to know in the post today.

Taking them a look, you will see that, most of them are quite familiar. For example, apples are so good for health if you eat them every day in the morning, but not everybody knows that their seeds contain poison. When eating a number larger of the seeds, you will get be dangerous immediately. Rosary Peas are used in jewelry, but the poison in the seed is one of the most fatal toxins on Earth. And there are a lot of other poisonous plants on this list, let learn about them to avoid! Eating an apple a day is good for health, but apple seeds are in contrast. The seeds contain cyanogenic glycosides, making them mildly poisonous. If you consume enough of the seeds, you could ingest a fatal dose. So, to be safe, you should remove the seeds before eating.

Both the foliage and the berries of this plant are extremely toxic. The nightshade family includes common food plants, including potatoes, tomatoes, eggplants, and chili peppers. So, humans and pets should avoid potato and tomato foliage and vines in the garden. This plant is actually deadly. They are used in jewelry around the world. Many jewelry makers have died after pricking a finger while handling a rosary pea. The poison contained within the seed is abrin, a close relative of ricin and one of the most fatal toxins on Earth. Oleander is one of the most toxic, commonly grown garden plants in the world, and oddly enough, it’s often found in schoolyards. Ingesting any part of this plant can be deadly, especially for children. Even smoke from burning oleander can be fatal. Nearly all parts of this European Yew tree can be poisonous. The exception is the red fleshy aril that surrounds the toxic seeds. And the aril is frequently eaten by birds. Some people have chosen to commit suicide by ingesting the leaves or the seeds, both of which contain a poison called a taxane. Sometimes there are no symptoms of poisoning and a person or animal can die within a few hours of ingesting yew seeds or leaves. If there are symptoms, they can include a fast heart rate, muscle spasms, and labored breathing. Daffodils grow from bulbs that could be mistaken for edible food, like an onion. Daffodils are common ornamental plants with a bright, cheery, and mostly toxin-free flower. Most daffodils are deer- and vermin-resistant, but gardeners shouldn’t overlook the dark side of this plant. The Greek philosopher Socrates sometimes referred to daffodils as the “Chaplet of the infernal Gods” because of the plant’s numbing effect. If consuming the fruit of a doll’s eye plant (or white baneberry) could kill you. The berries contain cardiogenic toxins that can have an immediate sedative effect on cardiac muscle tissue. Symptoms of poisoning include burning of mouth and throat, salivation, severe stomach cramps, headache, diarrhea, dizziness, and hallucinations. Ingestion of the berries can eventually lead to cardiac arrest and death. All parts of the plant contain relatively simple alkaloid coniine which causes stomach pains, vomiting, and progressive paralysis of the central nervous system. Dendrocnide Moroides are the deadliest and most potent stinging nettle in the world. Accidentally brushing past any part of this plant or its stinging relatives can deliver a potent toxin that will cause a painful stinging sensation lasting for days or even months. A severe sting from this plant will cause a severe allergic reaction in pigs, horses, dogs, and many other animals, but there’s not as much evidence that it has killed humans. Castor beans contain one of the most poisonous substances in the world, ricin. Just one castor bean has enough ricin to kill an adult within a few minutes. However, castor bean plants are frequently grown for decorative purposes, even in parks and public places.

20 Plants To Attract Beneficial Insects In Your Garden

9 Incredible Jasmine Plant Benefits That Bring To Your Life

10 Chemical-Free Ways To Control Weeds From Your Garden

14 Ways to Add a Rustic Touch for Your Porch

17 Stunning Blue Foliage Houseplants To Liven Up Your Living Space