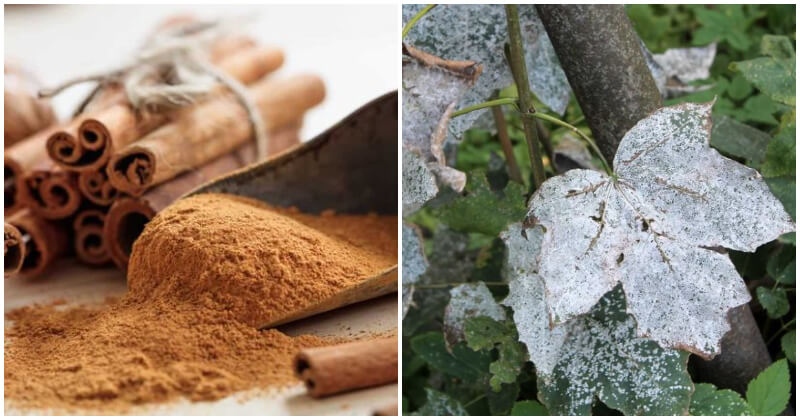 Cinnamon has many uses in the garden if you know ways to take advantage of it. For many people, cinnamon is a familiar ingredient in the kitchen space but they don’t know that there are some uses when applying it in the garden as a natural method. In this post today, we want to share 11 Amazing Cinnamon Uses in Your Garden to transform your yard into a lush and beautiful place naturally.

It is an effective and safe anti-fungal treatment that is inexpensive and easy to use. You may have used cinnamon to prevent damping off disease in seedlings, but it has many more uses in the garden that you may not have tried. And all of the good uses are gathered here, you just spend your time exploring them, you will be amazed at the good results that they can bring to. Keep reading to know more detail about cinnamon use and get its superpowers working in your garden. If you don’t want to get rid of wild mushrooms from the garden, cinnamon is a helper! Simply, just sprinkling cinnamon around the places mushrooms pop up, it will definitely keep them in check. Your plants are getting trouble with fundal diseases, you just mix some cinnamon into warm water and let it steep overnight. Strain, fill it in a spray bottle and spray your plants. There are some other diseases that might be harmful to seedlings. This solution, simply sprinkling the cinnamon powder in the soil to protect your seedlings. For the propagate method, you can use cinnamon to access a rooting hormone.
How to do: Firstly, wet the cutting in water. And then, roll it in cinnamon powder before planting. Applying this way will prevent disease and infections during the process when your cutting will start to root. Rust is also a common fungal infection problem. To repel, sprinkling cinnamon powder in the soil while planting, this easy tip will deter rust from your garden. Getting rid of ants from the garden by using cinnamon is an effective method because ants hate the strong smell of cinnamon. To apply, you just sprinkle cinnamon on ants tracks or where you don’t want ants. Gardeners are easy to bite by bugs or insects when working in the garden, you can treat the bite by mixing a paste of cinnamon and honey to ease itching.

#9 Use on Indoor Plants Not only plants in the garden, but your indoor plant also gets benefits from cinnamon. Getting rid of whiteflies, spider mites, and other pests easily by sprinkling the cinnamon powder around your plants and on the affected area. Besides, you can use cinnamon to prevent mildew and mold on indoor plants. Using cinnamon, you can repel squirrels, rabbits, and moles from your garden. Sprinkling cinnamon dusting on the ground will irritate the mucous membrane in their nose and mouth without persistent harm. For plant wounds, you can treat cinnamon. Simply, sprinkle cinnamon on the affected area, it will help promote fast healing.

30 Best Houseplants To Place In Your Living Rooms

26 DIY Candle Holder Ideas To Liven Up Your Living Space

Old Jeans And Impressive Gifts For Your Garden

9 Herbs That Can Grow Well in The Heat

25 Awesome Landscaping Ideas To Connect With Nature In Modern Styles

Sacred Plants In The World

The Collection of 10 Fastest-Growing Vegetables In India

15 Best Cascading Plants Types To Grow For Your Retaining Walls

20 Best Uses Of Lemon That Everyone Should Know

16 Plants Contain Poison That You Must Know

Eye-catching DIY Concrete Projects To Liven Up Your Garden

How To Turn Old Logs Into Brilliant DIY Planters?

10 Plants You Shouldn’t Grow Near The Swimming Pool

10 Best Indoor Plants That Are Good For Healthy Lungs