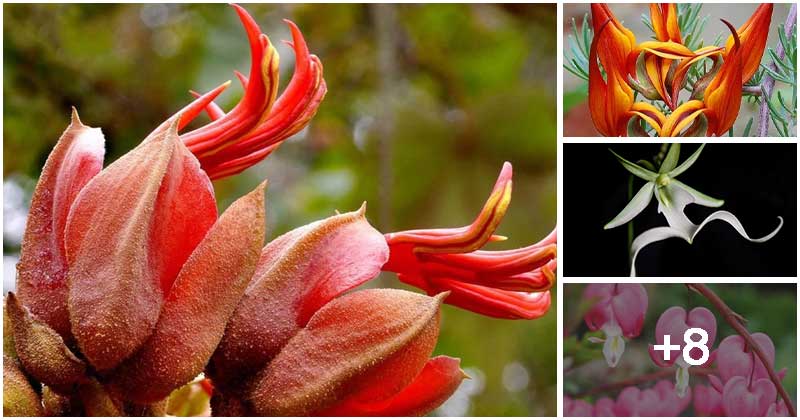 In the natural world, there are countless plants, and each has its own color and beauty. So if you are a true plant lover, you will love exploring the 12 Most Exotic And Rarest Flowers Around The World to know that the natural world around us is a gallery of never-ending great things. Spend your time checking out them with us!

When it comes to flowers, you will think about pretty blooms. In fact, there are many types that have strange shapes, sizes, patterns, and colors. Some even coincidentally resemble dancing girls to a ghost. Each has its own characteristic and beauty, of course, they will give you different interesting experiences. Their stunning colors and biodiversity could attract all eyes, and you too! Keep scrolling down and open their world. Dancing Girls Flower is one of the rarest flowers as it is not that easy to spot in the wild. It has uniquely shaped petals that look like dancing girls. Ghost Orchid is rare as it only grows in a very specific climate. Also, it also does not grow leaves as other orchids do and it is listed as an endangered orchid species. Parrot’s Beak has petals of this plant form a bird’s beak shape of red and orange colors, hence the name. It also goes by the name coral gems or pelican’s beak. They are now listed as extremely rare and environmental laws have been passed in Spain and the Canary Islands to conserve the remaining Parrot’s Beak plants. Cooke’s Kokio is another species belonging to the Hawaiian hibiscus family. It has large, ivy-like leaves with showy deep red flowers that look like the ears of the dog Cocker Spaniel and a dangling thin plume in the middle. Sea Daffodil is rare because it grows in clumps in the beach sand during the summer and never grows inland. This flower looks like the sun. Red Indian Pipe looks like weird mushrooms. It is rare because it does not need photosynthesis to grow. They could just grow anywhere in the wild, like mushrooms, they only bloom after it rains. Devil’s Hands Flower is native in Mexico that has petals literally look like a red hand, exploding from a brown-red, larger petal. The Pokemeboy displays attractive looks with its pinnate leaves and bright yellow flowers that look like small pompoms. This tree is only found in the British Virgin Islands but is now listed as critically endangered because of tourism and limited habitat. Lady’s Slipper Orchid is a rare orchid species as t was already listed as extinct before the 20th century but a yellow species of it was discovered in England accidentally in the 2000s. When its flowers bloom, they branch out from a pouch-shaped part of the flower. Fire Lily is now considered endangered because of overharvesting and can only be found in Asia, the Pacific, and Africa. It puts off trumpet-shaped flowers in orange, yellow, and fiery red colors that resemble flames. It also is toxic since exposure to its flowers causes skin irritation. Western Underground Orchid is not just rare but also looks odd that looks like a pomegranate fruit when opened. This Australian native plant only thrives underground and does not see sunlight. The Youtan Poluo is listed as the rarest flower ever because it only blooms every 3000 years. It is also called Udumbara. This very tiny flower is native only in China and Taiwan and is considered parasitic especially on palm leaves. In sacred Buddhist texts, this flower symbolizes immortality.

12 Easy Perennial Plants To Grow In Your Garden

11 Common Houseplant Diseases and Methods To Control Them

8 Easiest Natural Ways To Add Free Nutrients To Your Plants