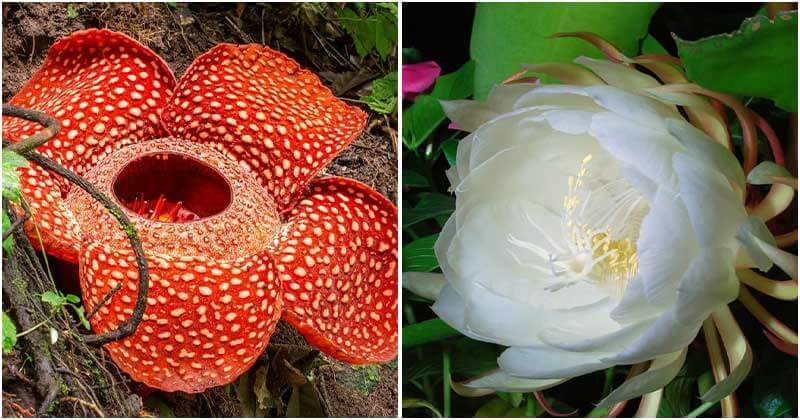 When it comes to natural beauty, we can’t help talking about flowers, they have an ethereal and fleeting beauty incomparable to anything else in the world. But unfortunately, many rare flowers in the world have already gone extinct in the wild and only exist in scarcity. And we are so want to share the list includes those flowers that bloom only once every few decades and those that require certain conditions to bloom, these make them unique.

If you are curious to know about and enjoy these rare flowers from all over the world, you are in the right place. The rarest flowers in the world are in fact the protagonists of this article. And you may never even hear of them. For example, do you know jade vine, ghost orchid, or chocolate cosmos? These are beautiful and sometimes exotic-looking flowers. So, keep reading to explore about them! Indian pipe or ghost plant is a flower from a parallel universe. It is totally white, with translucent stems and bell-shaped flowers. It is weird because it has no chlorophyll. It is one of the few plants that do not have a photosynthesis process. Titan arum or corpse flower is a celebrity among rare flowers. The plant itself will leave its few, large, and oval-shaped green leaves as the only sign of its existence for years. Then, suddenly, this colossal flower will come out of the soil and attract pollinators from miles away. This usually happens once every 7 to 10 years! The heaviest titan arum on record weighed a whopping 339 lb. (153.9 Kg). This flower is only one millimeter across as a flower (0.04 inches)… It is white and it grows on a spiderweb thin stalk. They are so tiny that they are easily confused for small insects, like aphids. It blooms very, very rarely, allegedly only once every – 3,000 years! Western Underground Orchid is a rare and absurdly strange flower It always stays underground! It produces petal-shaped pink bracts which hold loads of small bright red flowers inside. Up to 100 indeed. It looks a bit like an open pomegranate shaped into a flower. Jade vine, a.k.a. emerald vine is another very weird and rare flowering plant. It is a woody vine from the Philippines with long stems and large, elliptical dark leaves. They come in big drooping clusters and they look a bit like claws or the beaks of parrots. On the blue to turquoise shade, it is very ethereal and otherworldly, almost ghost-like. Gibraltar campion may not look striking or exotic, but it is very rare indeed. It has five white to pink violet split petals, and it looks similar to much more common members of the same genus, like the very common Silene latifolia you can find in most temperate prairies, white campion. Sea daffodil is a wonder of Mediterranean beaches, but a rare one at that. It has beautiful white flowers with shorter petals at the front and then long and thin white petals that curve back at the back of the flower. Like a white Sun with long rays. It grows straight out of the sand in clumps during the summer season, which makes it quite unusual too. This orchid of the Gloriosa genus may be rare, but it is also very famous. It has green to yellow petals with a bright magenta labellum (central petal). And it may look like any ordinary orchid. But this cultivar developed in China is very rare and sought after, and it only blooms once every 4 or 5 years. Parrot’s beak is rare, the flowers look like flaming parrot beaks pointing up from the crawling branches of this plant. They come in fairly large groups and they can be flaming red or bright yellow. This makes them a great spectacle with excellent gardening value. Cooke’s kokio is a rare Hawaiian flowering plant with a weird look. The leaves are pretty, large and similar to that if ivy, fine. They large deep crimson red and they look like two cocker spaniel’s ears with a long plume in the middle.

15 Amazing Hacks To Care Houseplants With The Lowest Budget

9 Plants You Should Grow To Fight Mosquitoes

19 Cozy and Romantic Backyard Seating Ideas For The Perfect Date

29 Fall Foliage Plants That Look Great In The Garden

12 Uses Of Lavender In The Home And Garden