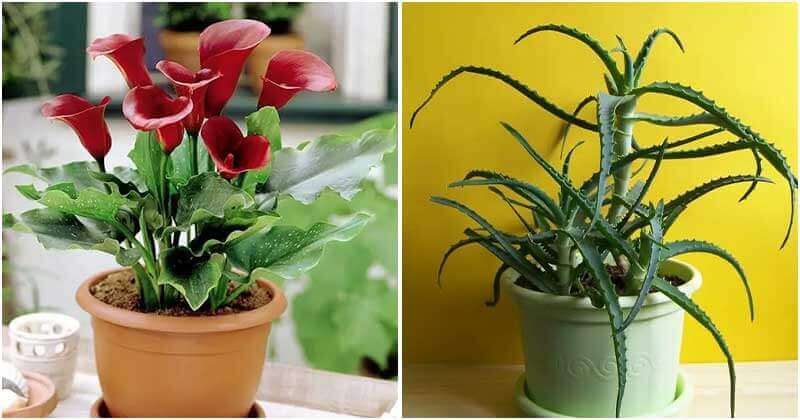 Houseplants help your house more beautiful and closer to nature. So, a lot of people want to grow houseplants to decorate their houses. However, there are houseplants that aren’t good for dogs and cats. If you own a pet, it is better to know about them. And that’s the reason why we’ve listed 30 plants that you should keep your dog stays away from. Check them out!

As you know dogs are one of the curious animals, especially when they are young. They are extremely argus-eyed in their quest any things. And if your dog has a tendency to look for something to nibble on, this list of plants for dogs will help you to avoid. Even so, you can still grow these plants if you love them by placing them in sites that have a safe height to your pets can’t touch or eat. Save them. If your dog eats this plant. Some symptoms can occur such as mucous membrane irritation, intense burning, and irritation of the mouth, lips, and tongue, excessive drooling, vomiting, difficulty in swallowing. A kind of leaf succulents, many varieties have various medicinal uses. But aloes are the plants toxic to dogs but only when they ingest it. Symptoms like vomiting, depression, diarrhea, lack of appetite, change in the color of urine. The plant contains calcium oxalate in its sap, which is harmful if contacted or ingested. Symptoms like vomiting, depression, diarrhea, lack of appetite, chills, change in the color of urine. Calla lilies are beautiful but when the plant is chewed, clinical signs are visible immediately such as oral pain, diarrhea, drooling, lack of appetite, pawing at the mouth. ZZ plant belongs to the Araceae family. Symptoms such as mucous membrane irritation, intense burning, and irritation of the mouth and lips, tongue, excessive drooling. Often called a dumb cane. Chewing or biting into this plant can cause injury. Symptoms such as mucous membrane irritation, intense burning, and irritation of the mouth and lips, tongue, excessive drooling, vomiting, difficulty in swallowing. Jade Plant is mildly toxic. Symptoms such as nausea, retching. Kafir lily is an exquisite plant with succulent leaves and orange flowers. Its ingestion can cause kidney failure in cats; it is also one of the toxic plants to dogs. Symptoms such as vomiting and diarrhea. Large intake causes convulsions, low blood pressure, tremors, and cardiac arrhythmia.

12 Easy Perennial Plants To Grow In Your Garden

10 Indoor Plants That You Can Use As Christmas Trees

21 Fruits That You Can Grow in Balcony, Rooftop, and Patio

Collection of 23 Appealing Ideas For Your Amazing Garden

19 Types of Root Vegetables That Have Great Taste

Super Delicious Asian Vegetables To Grow In Your Garden

25 Brilliant Ideas To Decorate Your Backyard

25 Clever Home Decor Ways With Your Chopping Board

11 Houseplants That You Can Grow From Leaves

25 Awesome Landscaping Ideas To Connect With Nature In Modern Styles

9 Natural Ways To Repel Squirrels From Your Garden

Best Easy And Effective Ways To Get Rid Of Mice

16 Houseplants That Have Attractive Rainbow Leaves

9 Awesome Reasons When Using Tea Leaves In The Garden

Easiest and Most Beautiful Flowers That You Should Grow In Garden